[an error occurred while processing this directive]

The youngest of the UAE's seven emirates fronts the Gulf of Oman and makes a good base for exploring the eastern coast. Fujairah is regarded as the prettiest part of the country. It boasts a museum showcasing archaeological and ethnographic displays, a spooky old town and a 300 year old fort. Bithna, 12km (8mi) north-west of Fujairah, has several archaeological sites, including the Long Chambered Tomb, thought to have been a communal burial place, and an impressive fort.

With the magnificent Hajar Mountains as a backdrop, its tranquil white sandy beaches and lush vegetation, Fujairah has always been a popular weekend destination within the UAE, and increasingly so for European holiday makers to the Middle East. In recent years, the country's fourth largest city has experienced unprecedented investment and development to accommodate the growing demands of tourism and increased multi-national corporate presence. With the commitment of the ruler of Fujairah, H.H. Sheikh Hamad bin Mohamed Al Sharqi, and the Federal Government, development plans for the next five years include more new hotels and beach resorts and a multi-storey entertainment and shopping complex. In addition, expansion and development of the region's famous ceramic and horticulture industries continues. Despite the city's growth, Fujairah has retained its unique beauty, exotic mysticism and rich cultural heritage, which have earned it the enviable reputation as the "Jewel of Arabia".

Located near the Fujairah Fort, this delightful museum guides the visitor through 3000 years of history.  From the arrow heads to kohl pots to fishing nets, the pieces are presented in simple but elegant displays.  Wandering through the galleries one finds oneself drifting into Fujairah's past: beautifully shaped stone containers, strong, slim swords, and elaborate silver jewelry suggest a long complex history. Visiting this museum is a pleasant interlude from the other more vigorous activities associated with Fujairah's outdoors . 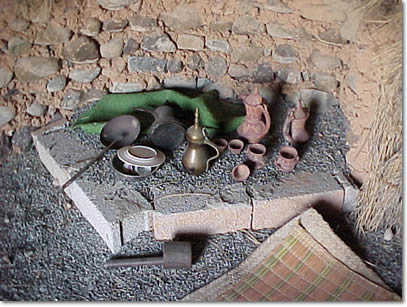 Walk into old Fujairah; village life is beautifully replicated at the Fujairah Heritage Village.  This site lies near the Ruler's Palace and is a must-see during your stay in Fujairah.  Life in the past is portrayed through various exhibits demonstrating how people lived, how they worked, farmed and played.

The village is surrounded by a tall, palm-frond fence built in the traditional style.  Displays include a majlis, raised sleeping platforms with cradles attached for the children; a traditional water well centrally located; and farming utensils.  The use of, and dependency on, the palm is apparent throughout the site. 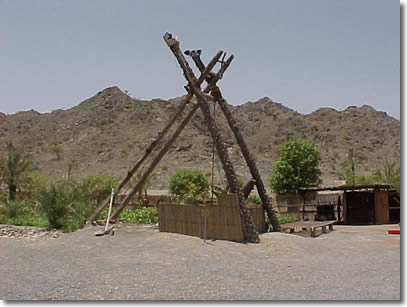 Markets of all kinds abound in Fujairah.  Every morning the local fish catch is laid out on gleaming tables and the bargaining begins.   Hammour, Sultan Ibrahim, red snapper, tuna, grouper and shark lay side-by-side with fresh squid and shellfish.  Good-natured vendors compete with each other to give you the best price of the day. 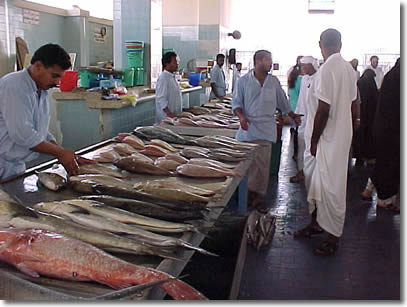 The Friday Market outside of Masafi attracts visitors from all over the UAE.  Carpets and Gulf pottery line the sides of the highway, an irresistible pull to bargain hunters and souvenir seekers.  In addition to machine-made carpets and mass-produced pottery, the discriminating shopper can find one-of-a-kind handmade goods. 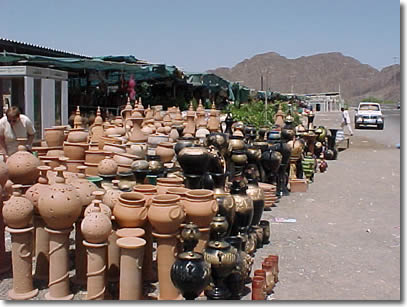 There is no matador, no corrida, and no bloodshed at the bullfights in Fujairah.  However, as the sun sinks into the Hajar Mountains and the moon rises over the Indian Ocean, a fine time can be had by all at the makeshift bullring on the coast road to Kalba.  The contest, which is held on weekends in the winter, pits Brahmin bull against bull in more of a wrestling match than a traditional bullfight. 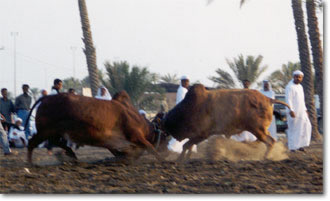 Peter Hellyer, in Fujairah: An Arabian Jewel , explains that the bulls are raised on a diet of milk, honey, and meal and that they are prized for the "massiveness of their necks and shoulders and the sturdiness of their haunches."  Two bulls are led onto the sandy arena and, with heads down and noses almost touching the ground, they wrestle and lock horns.  The horns are blunt and while one bull may occasionally get tangled in the harness of the other there is really little violence.  Eventually one bull may force the other out of the ring, but more often one bull tires and walks away. 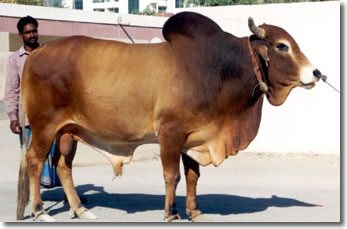 Bull fighting has been called Fujairah's national sport, and it is unique to the Emirate.  While no one is sure of the sport's origins, tradition says that the Portuguese introduced the matches.  Another legend, heard at the matches, is that two suitors vied for the same maiden's hand in marriage and the families agreed to let the family bullocks decide the match by wrestling.

Visitors are made to feel welcome and the only regret is that the match ends too soon.  When it is over, the bullocks can be seen stepping gingerly into the beds of pickup trucks for the ride home.

Hiking in the Hajar Mountains

From anywhere in Fujairah, dozens of rocky mountains beckon the adventurous hiker.  Within a fifteen-minute drive, hikers can be headed to the top of a mountain, and in an hour or two they can be standing on top gazing at the coastline below or mountains spreading off in all directions, even into neighboring Oman. 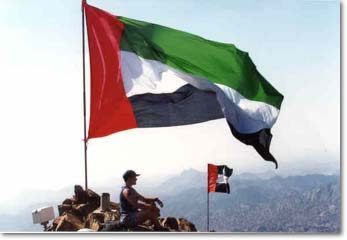 Besides the views, it's a pleasure to hike the Hajars and find treasures such as abandoned stone dwellings, storage buildings and even forts that date back to as early as 2000 BC. Goat and wild donkey trails lead you up and up into the tumbled rockscapes. If you are sharp-eyed you may spot lizards, snakes, wildcats or hunting birds. Smaller birds like larks, Bee-eaters, Bulbuls and Wheatears sing in the wadis and peaks, making the only sound in the grand silence of the hills.

Most of the nearby Hajars can be climbed with only moderate climbing skills, but there are more difficult routes that can call for the use of proper climbing equipment.  The majestic Hajars call to both "ramblers" and experienced "scramblers" alike to come investigate.

[an error occurred while processing this directive]