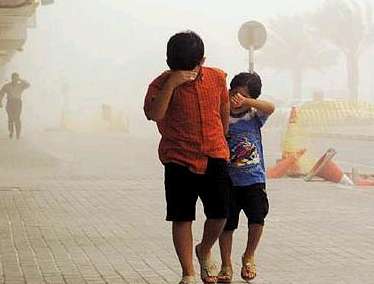 Situated between 22 and 26 degrees north, the United Arab Emirates lies within a sub-region of the northern desert belt, characterized by scanty and erratic rainfall, and high levels for temperature, humidity, and sunshine. Winter sunshine averages eight hours per day, while the summer figure reaches as high as eleven hours a day. Despite this apparently stable climatic picture, the weather does show a remarkable degree of local variability, throwing up thunder storms, fog, gale force winds, sand storms and, of course, rain.

Average precipitation figures count for relatively little here since the range of readings , from one year to the next often exceeds twice the nominal ''average'' figure , i.e. roughly 8 cm (80 mm) per year. Most rain falls in the winter months, from November to April. Less frequent, but nevertheless important rainfall occurs in isolated summer showers, carried into the area by south-westerly monsoons, and often occurring at the eastern edge of the great Rub al Khali, along the borders between Abu Dhabi and Saudi Arabia.

The weather chart during much of the year shows a ridge of high pressure extending southwards into central Saudi Arabia with lower pressure over the eastern Gulf. Prevailing light to moderate north-westerly winds, known by their Arabic name shamal, meaning 'north', are associated with mid-latitude disturbances. Along the western coastal plain, sea breezes tend to dominate with light south-south-easterlies at night being replaced by moderate north-westerlies during daytime. This pattern changes on the east coast where the proximity of the mountains results in gusty and less predictable wind shifts. A good strong blast of northerly shamal is usually preceded in the UAE by strong southerly winds, raising desert sands and reducing visibility. The shift to northerly winds may be quite sudden and can be accompanied by rain, thunder storms, or dust-storms. At sea, conditions can become quite difficult for small boats with force seven winds whipping up twelve foot high waves. In summer, weather charts usually indicate a broad area of low pressure, extending from the western Sahara, across the Arabian peninsula and across Asia, to China. Local pressure variations in the Gulf combine with this to create weather conditions in the UAE. Steady north-westerlies, predominating in the central and northern regions of the Gulf, do not generally extend as far south as the UAE. When they do so, sea conditions around Abu Dhabi become quite rough, while the rest of UAE's coastal waters experience only slight swells.

The UAE is the first country in the Middle East to introduce the Satellite Delivered Information System technology (SADIS), a weather forecasting technology which covers the globe, with the exception of Polar Zones. According to the National Meteorological Authority (NMA), which is affiliated to the Ministry of Communications, the system supplies data on temperature, humidity, volcanoes and wind directions. It also enables the UAE to receive the latest forecasts for centers all over the world through direct contact with the world center in London. The NMA has qualified forecasters to operate the system, and is currently training more forecasters to operate it.

Arabic interest in the weather and in the different types of winds blowing across the desert stems from the Bedouin tribes, for whom changes in weather could mean the difference between life and death. For them, each wind had its own characteristics and was known by a different name; thus, the main period of storms was Al-Barih al-owd, while the minor storm period was called Al-Barih al-sagheer. The first major Shamal occurring around May 25th is the Al-Haffar, or the driller since it drills huge depressions in the desert dunes. The second, arriving in early June, coincides with the dawn star, Thorayya (Pleiades) and is therefore named Barih Thorayya. During this one, which is somewhat more violent than the others, fishermen tend to remain in port, not just because of the wind's strength, but because ancient folklore tells them that this wind devours ships! Near the end of June, the last shamal arrives, known as the Al-Dabaran. It is a violent wind, continuing for several days. Local residents keep doors and windows firmly barred in a battle against the all-penetrating fine dust driven by these shamal winds into every conceivable nook and cranny.

The summer months, from June to September, are too hot for comfort. Midday temperatures range from 35°C to 42°C, and occasionally top 49°C at the height of summer. During this period there is a sharp drop in night time temperatures, with these falling to roughly half the midday readings, i.e. 20°C to 28°C, and providing a welcome respite from the searing heat of the day. Gulf waters exert a modifying influence on coastal zones, which experience less dramatic diurnal fluctuations in temperature, and higher humidities than inland regions. Although the evenings are not so cool, coastal towns do have the advantage of pleasantly refreshing sea-breezes . Mountainous regions are also cooler and less humid. From December to March, the climate is considerably more equable with midday temperatures ranging from 25 to 35°C and falling to as low as 9°C at night.

The most exciting and most popular tour in Dubai. Dubai Desert Safari is treat for any one visiting Dubai. you will Experience a thrilling drive in the sand dunes. Your Tour begins at about 4PM we will pick you from your hotel or home in Dubai or Sharjah. You will Take a Jeep drive across the majestic sandy dunes just outside Dubai, your experienced Safari driver cum Guide will ensure you enjoy the trip across the undulating sand dunes, We stop for Sunset and take photographs and enjoy the some rough but careful tactic of driving in fine sand. We will stop for Sunset for a picture of the Sunset in the desert and later visit a camel farm. Upon arrival at the Desert camp you will have the opportunity to ride a camel, Do Sand Skating, have Hinna painting on your hands and Shop for interesting handicrafts.  Once in the camp you will be served a delicious B.B.Q. dinner beside a blazing bonfire and entertained by a traditional Belly dancer. The Dinner includes a verity of Arabian & continental dishes including vegetarian and non vegetarian dishes You arrive back at your hotel around 2230 HRS.  Click here to see more pictures of the Dubai desert Safari. There is also a choice of overnighting at the desert on our Overnight Desert Safari. 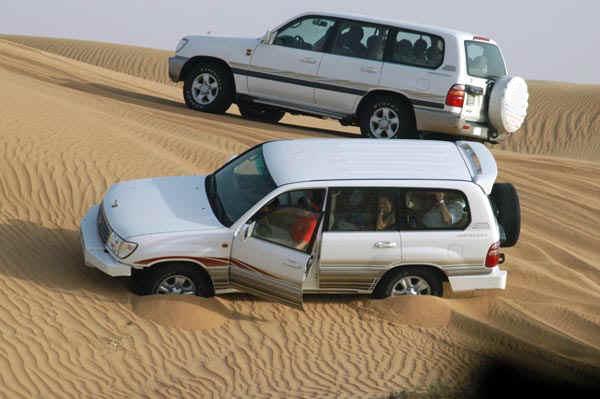